skip to main | skip to sidebar

I remember trying to explain the concept of "ANZAC day" to a Swiss friend once. He was incredulous that we Aussies had turned a hopelessly botched attack on Turkey into a national holiday.

Personally, I am amazed that the Turks welcome so many Aussie war tourists on ANZAC day every year. As Martin Flanagan observed in the Sydney Morning Herald: "Imagine if the descendants of the Japanese pilots who bombed Darwin held an emotional service beneath the Japanese flag on the shores of Darwin Harbour each year".

In essence, ANZAC day is a day of remembering, so today I'm remembering my great grandmother's brother, Vivian, and his mate, Norman - both of whom had the misfortune of being among the first men to hit the beach at Gallipoli on that first ANZAC day in 1915.

It's a shame that we, as a nation, only seem to remember this dreadful stuff for one day each year.

The United Kingdom declared war on Germany on 3 August 1914.

Less than four weeks later (on 29 August), two young miners from Broken Hill in NSW signed up with the AIF (Australian Imperial Force) in Adelaide. Both men gave their home address as the New Wentworth Hotel, Broken Hill. Their names were Norman Ernest Davis and Vivian Clarence Bence. Vivian (pictured below) was my great, great uncle. 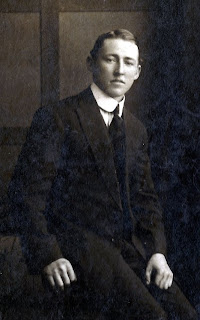 Who knows what Norman and Vivian were thinking when they enlisted for "Service Abroad"? It seems likely that even Adelaide would have been an exciting place compared with Broken Hill. But, whatever it was they were thinking, they couldn't possibly have imagined what they'd just signed up for.

On their attestation papers, in response to the question about previous military service, both Norman and Vivian list membership of the Orange Rifle Club as their only relevant experience.

Both men were assigned to the 10th Battalion (B Company). They sailed from Adelaide on the HMAT Ascanius on 20 October 1914.

At 3 am on Sunday 25th April B+D Coy & HQ=Bn staff, Signallers and scouts left the PRINCE OF WALES to the cutters life boats to be towed to within about 50 yards of the shore by steam boats.

Absolute silence was maintained by all men and boats & directly the boats were cast off by the steamers and quietly rowed towards the shore dawn was just breaking 04.15 no sound was heard except the splashing of the oars, we thought that our landing was to be affected quite unopposed, but when our boats were within 30 yards of the beach a rifle was fired from the hill in front of us above the beach, right in front where we were heading for, almost immediately heavy rifle and machine gun fire was opened upon us, we had to row another 15 yards or so before we reached water shallow enough to get out of our boats, this was at about 04.15

We got out of our boats into about 3’ of water & landed on a stony bottom the stones were round & slimy & many Officers and men slipped on them & fell into the water, but all bravely & silently made all hast to reach the beach, under a perfect hail of bullets, many men fixed their bayonets before reaching the shore. I ordered men to lie down, fix bayonets & remove packs. This was done in a couple of minutes. The men of the 9th 10th & 11th Bn were all mixed up on the beach, but there was no time to reorganise so ordered all to advance.

The men sprang to their feet at once & with a cheer charged up the hill held by the Turks and drove them off it. Following up their success by firing on the quickly retreating foe. Shortly after this, the two Companies A & B, off the torpedo Destroyer reached the beach, they were subjected to heavy Shrapnel and Machine Gun fire, these companies pushed on quickly and soon joined us in a general advance.

By about 08.30 we were about a mile inland & were holding by hill and ridge in front of it, we then pushed on to SHRAPNEL HILL & I reported to the Brigadier Col Macfagan, he was anxious for us to push on to the west ridge but as the enemy just then developed a strong counter attack he decided that we should "dig in" on the forward slope of SHRAPNEL RIDGE N/E.

The ANZACS "dug in" at Gallipoli for the remainder of 1915.

Vivian's military record has just one entry pertaining to the time he spent on the Gallipoli Peninsula: on 4 September 1915, he was punished for "Not complying with an order. Absent from duty".

Perhaps, after more than four months of risking his life for King and country, Vivian decided to take what is colloquially known these days as "a mental health day". Or maybe he had just received the news that his mate, Norman, had died 4 days earlier.

Norman was shot in the head at Gallipoli on 18 August 1915. He was taken to the Canadian Hospital on the island of Lemnos where he died thirteen days later, of septic meningitis and a compound fracture of the skull.

Norman Ernest Davis died on 31 August 1915 - one year and 2 days after enlisting.

Norman's effects were recorded and returned to his father in Orange. They consisted of: "Cuff links. Wrist watch (damaged). Body belt. Razor."

Uncle Vivian survived Gallipoli, and was subsequently sent to the Western Front. He survived the Western Front too, and eventually returned to outback Australia - which probably never seemed quite so boring again.

Here's to the memories of: 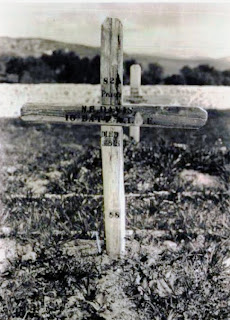 Samantha in Oz
Central west NSW, Australia
I am an agricultural scientist with a passion for food, and right now I'm busy learning to live simply, sustainably, and *well* in turbulent times. You can contact me at sam@tava.com.au